Providing a Hopeful Future for Our Children

One in ten Americans have Type II diabetes, and if current trends continue, one in three babies born today will be diabetic at some point in their life. Obesity in America has reached an epidemic level, and the rest of the world is quickly following in our steps. According to the National Health and Nutrition Examination Survey, the Body Mass Index of Americans as a society is 25 pounds heavier than it was 25 years ago. That was shortly after high fructose corn syrup was introduced to the United States. At that time, the American Heart Association, American Medical Association, and US Department of Agriculture recommended reducing dietary fat intake from 40% to 30%, and consequently, food manufacturers began adding sugar and high fructose corn syrup to their products to make up for the loss of flavor when the fat content was reduced. Sucrose, or table sugar, is 50% glucose and 50% fructose, and the human body can only tolerate 12-15 grams of fructose a day before it is converted to fat. So, despite low-fat diets and exercise, this helps explain the increased incidence of obesity and related medical disorders plaguing our society such as heart disease, metabolic syndrome, and even arthritis. In a nutshell, fat isn’t making us fat, sugar is!

Thanks to the groundbreaking efforts of health professionals such as Dr. Robert Lustig, Dr. M. Frank Lyons II, Jorge Cruise, and many others, the word is spreading that we need to eliminate processed sugars such as table sugar, fructose, and high fructose corn syrup and eat whole foods as much as possible to achieve optimal health. Consumers are more educated than ever and are now demanding higher standards from their food manufacturers, such as use of non-GMO and organic ingredients. They are also demanding natural alternative sweeteners instead of simply accepting dangerous chemical sweeteners such as sucralose or aspartame. 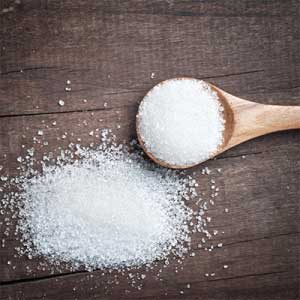 The best all-natural sweetener on the market today is xylitol. Xylitol is a polyol or sugar alcohol, and is only derived from plant sources. It is a natural crystalline carbohydrate that is not completely absorbed or metabolized by the body. The human liver actually produces one to two teaspoons of xylitol per day to aid in carbohydrate metabolism, so it is not foreign to the body, like sucralose or aspartame. Xylitol has 40% fewer calories but it looks and tastes just like table sugar. Xylitol is not a super-sweetener and has a one-to-one sweetness ratio to table sugar. It has no artificial aftertaste and is a delicious substitute for sugar when cooking.

Not only is xylitol completely safe, it is highly recommended for people with diabetes or insulin resistance because it does not spike blood sugar levels. Xylitol is ranked very low on the glycemic index at seven, comparing to table sugar at 85, honey at 55, and agave nectar at 30. Because xylitol is slowly released into the bloodstream, there is an increased sense of satiety, or feeling full after eating. There are literally thousands of research studies confirming the vast health benefits of xylitol.

XyloSweet is 100% xylitol and is a non-GMO, organically grown. For those new to ingesting large quantities of xylitol, remember to go slowly to avoid GI distress. After about two weeks use, GI sensitivity should subside as the body reaches a level of homeostasis.